Several MySQL releases happened yesterday, but of them all I am mostly interested in MySQL 5.7.23, as MySQL 5.7 (either directly or indirectly, via forks and upstream fixes they merge) is probably the most widely used MySQL GA release at the moment.

In this post (in a typical manner for this "Fun with Bugs" series)  I'd like to describe several bugs reported by MySQL Community users and fixed in MySQL 5.7.23. As usual, I'll try to concentrate mostly on InnoDB, replication, partitioning and optimizer-related bugs (if any).


I'd like to start with InnoDB and partitioning-related fixes:
Now let's check some replication bugs fixed:

Surely in MySQL 5.7.23 there had to be some community bug fixed that is kept private. This time it's a bug in mysqldump:

and this is a complete nonsense to me!

The last but not the least, we all should be thankful to Daniël van Eeden for these bug reports and patches contributed:
Had you noted any fixes to numerous public bug reports for InnoDB FULLTEXT indexes, "online" DDL or InnoDB compression, or optimizer maybe? I had not, and no wonder - the way these features are used by Community is obviously not something Oracle cares much about.

Anyway, I'd suggest to consider upgrade to MySQL 5.7.23 to anyone who cares about security and uses OpenSSL, replication of any kind or InnoDB partitioned tables in production.
Posted by Valerii Kravchuk at 8:17 PM 2 comments:

In one of my previous posts I stated that in Oracle's MySQL server some old enough features remain half-backed, not well tested, not properly integrated with each other, and not documented properly. It's time to prove this statement.

I should highlight from the very beginning that most of the features I am going to list are not that much improved by other vendors. But they at least have an option of providing other, fully supported storage engines that may overcome the problems in these features, while Oracle's trend to get rid of most engines but InnoDB makes MySQL users more seriously affected by any problems related to InnoDB.

The list of problematic MySQL server features includes (but is not limited to) the following:
I listed only those features I recently studied in some details in my previous blog posts. I've included main problems with each feature according to my older posts. Click on the links in the list above to find the details.

The Royal Pavilion of InnoDB in MySQL is beautiful from the outside (and somewhere inside), but is far from being completed, and some historical design decisions do not seem to be improved over years. We are lucky that it is still used and works nice for many current purposes, but there are too many dark corners and background threads there where even Oracle engineers rarely look and even less are improving them...
Posted by Valerii Kravchuk at 9:19 PM No comments:

In one of my previous posts I stated that Oracle does not care enough to maintain public MySQL bugs database properly. I think it's time to explain this statement in details.

The fact that https://bugs.mysql.com/ still exists and community bug reports there are still processed on a regular basis by my former colleagues, Miguel Solorzano, Sinisa Milivojevic, Umesh Shastry, Bogdan Kecman and others, is awesome. Some probably had not expected this to still be the case for 8+ years since Oracle took over the software and procedures around it. My former bugs verification team still seems to exist and even get some new members. Moreover, today we have less "Open" bugs than 6 years ago, when I was preparing to leave Oracle to join (and build) the best MySQL support team in the industry elsewhere...

That's all good and beyond the best expectation of many. Now, what's wrong then with the way Oracle engineers process community bug reports these days? 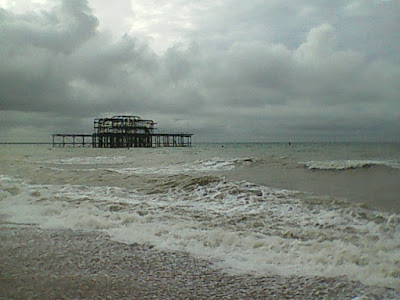 On the photo above that I made last autumn we see the West Pier in Brighton, England. It keeps collapsing after major damages it got in 2002 and 2003 from storms and fires, and this spring I've seen even more ruins happened. Same happens to MySQL public bugs database - we see it is used less than before, and severe damage to the Community is made by some usual and even relatively simple actions and practices. Let me summarize them.
I can continue with more items, but let's stop for now.

If we want MySQL public bugs database to never reach the state of the West Pier (declared to be beyond repair in 2004), we should force Oracle to do something to fix the problems above. Otherwise we'll see further decline of bugs database and Community activity switched elsewhere (to Percona's and MariaDB's public bugs databases, or somewhere else). It would be sad to not have any central public location for all problem reports about core MySQL server functionality...

Problems of Oracle's MySQL as an Open Source Product

In my previous summary blog post I listed 5 problems I see with the way Oracle handles MySQL server development. The first of them was that "Oracle does not develop MySQL server in a true open source way" and this is actually what I started my draft of that entire blog post with. Now it's time to get into details, as so far there was mostly fun around this and statements that MariaDB also could do better in the related Twitter discussion I had.

So, let me explain what forces me to think that Oracle is treating MySQL somewhat wrong for the open source product.

We get MySQL source code updated at GitHub only when (or, as it often happened in the past, some time after) the official release of new version happens. You can see, for example, that MySQL 8.0 source code at GitHub was actually last time updated on April 3, 2018, while MySQL 8.0.11 GA was released officially on April 19, 2018 (and that's when new code became really available in public repository). We do not see any code changes later than April 3, while it's clear that there are bug fixes already implemented for MySQL 8.0.12 (see Bug #90523 - "[MySQL 8.0 GA Release Build] InnoDB Assertion: (capacity & (capacity - 1)) == 0", for example. There is an easy way to crash official MySQL 8.0.11 binaries upon startup, fixed back before April 30, with some description of the fix even, but no source code of the fix is published) and 8.0.13 even (see Bug #90999 - "Bad usage of ppoll in libmysql"). With Oracle's approach to sharing the source code, we can not see the fixes that are already made long time ago, apply them, test them or comment on them. This is fundamentally wrong, IMHO, for any open source software.

In other projects we usually can see the code as soon as it is pushed to the branch (check MariaDB if you care, last change few hours ago at the moment). Main branches may have more strict rules for updating, but in general we see fixes as they happen, not only when new official release happens.


Side note: if you see that Bug #90523 became private after I mentioned it here, that's another wrong thing they often do. More on the in the next post, on community bug reports handling by Oracle...

Interesting enough, when the fix comes from community we can usually see the patch. This happened to the Bug #90999 mentioned above - we have a fix provided by Facebook and one can see the patch in Bug #91067 - "Contribution by Facebook: Do not use sigmask in ppoll for client libraries". When somebody makes pull request, patch source is visible. But one can never be sure if it's the final patch and had it passed all the usual QA tests and reviews, or what happens to pull requests closed because developer had not signed the agreement...

If the fix is developed by Oracle you'll see the code changed only with/after the official release. Moreover, it would be on you to identify the exact commit(s) that introduced the fix. For a long time Laurynas Biveinis from Percona cared to add comments about the exact commit that fixed the bug to public bug reports (see Bug #77689 - "mysql_execute_command SQLCOM_UNLOCK_TABLES redundant trans_check_state check?" as one of examples). Community members have to work hard to "reverse engineer" Oracle's fixes and link them back to details of real problems (community bug reports) they were intended to resolve!

Compare this to a typical changelog of MariaDB that leads you directly to commits and code changes.

What's even worse, Oracle started a practice to publish only part of their changes made for the release. Some tests, those for "security" bugs, are NOT published even if we assume they exist or even can be 100% sure they exist.

My recent enough favorite example is the "The CREATE TABLE of death" bug reported by Jean-François Gagné. If you follow his blog post and links in it you can find out all the details, including the test case that is public in MariaDB. With this public information you can go and crash any affected older MySQL versions. Bug reporter did everything to inform affected vendors properly, and responsible vendors disclosed the test (after they fixed the problem)!

Now, try to find similar test in public GitHub tree of Oracle MySQL. I tried to find it literally, try to find references to somewhat related public bug numbers etc, but failed. If you know better and can identify the related public test at GitHub, please, add a comment and correct me!

To summarize, this is what I am mostly concerned about:
I would not go into other potential problems (I've heard about some others from developers, for example, related to code refactoring Oracle does) or more details. The above is enough for me to state that Oracle do wrong things with the way they publish source code and threat MySQL as open source product.

All the problems mentioned above were introduced by Oracle, these never happened in MySQL AB or Sun. MariaDB and Percona servers may have their own problems, but the above do NOT apply to them, so I state that other vendors develop MySQL forks and related projects differently, and still are in business and doing well!
Posted by Valerii Kravchuk at 10:30 PM No comments:

Recently it's quite common to state that "Oracle's Acquisition Was Actually the Best Thing to Happen to MySQL". I am not going to argue with that - Oracle proved over years that they are committed to continue active development of this great open source RDBMS, and they have invested a lot into making it better and implementing features that were missed or became important recently. Unlike Sun Microsystems, they seem to clearly know what to do with this software to make it more popular and make money on it.

Among the right things Oracle does for MySQL server development I'd like to highlight the following:
So, Oracle is doing good with MySQL, and dozens of their customers, community members and MySQL experts keep stating this all the time. But, as a former and current "MySQL Entomologist" (somebody who worked on processing MySQL bug reports from community and reported MySQL bugs for 13 years), I clearly see problems with the way Oracle handles MySQL server development. I write and speak about these problems in public since the end of 2012 or so, and would like to summarize them in this post.


Here is the list of problems I see:
In the upcoming weeks I am going to explain each of these items in a separate post, with some links to my older blog posts, MySQL server bug reports and other sources that should illustrate my points. In the meantime I am open for comments from those who disagree with the theses presented above.
Posted by Valerii Kravchuk at 6:29 PM No comments: