A lot of time passed since my previous post in this series. I was busy with work, participating in FOSDEM, blogging about profilers and sharing various lists of MySQL bugs. But I do not plan to stop writing about my usual weeks of doing support engineer's job. So, time for the next post in this series, based on my random notes taken during the week here and there.

This week started for me with checking recent MySQL bug reports (actually I do it every day). I noted recent report by Roel, Bug #85065. Unfortunately it was quickly marked as "Won't fix", and I tend to agree with Laurynas Biveinis that this was probably a wrong decision. See a discussion here. Out of memory conditions happen in production and it would be great for MySQL to process them properly, not just crash randomly. Roel does a favor to all of us by checking debug builds with additional unusual failure conditions introduced, and this work should not be ignored based on some formal approach.

It's a common knowledge already that I try to avoid not only all kind of clusters, but all kinds of connection pools as well, by all means. Sometimes I still fail, and when I find myself in unlucky situation of dealing with connection pool in Apache Tomcat, I consider this reference useful.

This week I had a useful discussion on the need for xtrabackup (version 2.4.6 was released this week) on Windows (customers ask about it once in a while and some even try to use older binaries of version 1.6.x or so from Percona) and any alternatives. I was pointed out to this blog post by Anders Karlsson. I remember reading something about using Volume Snapshot Service on Windows to backup MySQL back in Oracle in 2012, and really have to just try how it works based on the blog above and this reference. But I still think that, at least without a command line wrapper like mylvmbackup, this approach is hardly easy to follow for average Windows user (like me) and is not on pair with xtrabackup for ease of use etc.

I spent some time building new releases of Percona Server, MariaDB and MySQL 5.6 from Facebook on my Fedora 25 box (this is also one of the first things I do every morning, for software that got updates on GitHub), so just to remind myself, here is my usual cmake command line for 5.7-based builds:

I do not have it automated, so sometimes the exact command line gets lost in the history of bash... Never happens with MySQL from Facebook or MariaDB (as we see new commits almost every day), but easily happens with MySQL 5.7 (because they push commit only after the official releases) or Percona Server (as I do not care that much about it for a year already...). This time I noted that one actually needs numactl-devel package to build Percona Server 5.7. Was not the case last time I tried.

I also paid attention to blog posts on two hot topics this week. The first one is comparing ProxySQL (here and there) to recently released MaxScale 2.1. I probably have to build and test both myself, but ProxySQL seems to rock, still, and I have no reasons NOT to trust my former colleague René Cannaò, who had provided a lot of details about his tests.

Another topic that is hot in February, 2017 is group replication vs Galera. Przemek's recent post on this topic caused quite a hot discussion here. I still consider the post as a good, useful and sincere attempt to compare these technologies and highlight problems typical experienced Galera user may expect, suspect or note in the group replication in MySQL 5.7.17. Make sure you read comments to the blog post, as they help to clarify the implementation details, differences and strong features of group replication. IMHO, this post, along with great series by LeFred and comments from community, really helps to set proper expectations and setup proper understanding of both technologies.

The last but not the least, this week Mark Callaghan had confirmed that InnoDB is still faster than MyRocks on all kinds of read-only all-in-memory workloads (he used sysbench 1.0 tests) on "small server"/older hardware. I've noted this on a specific use case of Bug #68079 almost a month ago...

This week I worked on several interesting customer issues (involving Galera, CONNECT engine, security concerns, MySQL 5.1 and the limit of 64 secondary indexes per InnoDB table etc) that are not yet completely resolved, so I expect a lot of fun and useful links noted next week. Stay tuned!
Posted by Valerii Kravchuk at 6:37 PM No comments:

Fun with Bugs #48 - Group Replication Bugs and Missing Features as of MySQL 5.7.17

It seems recent post on Group Replication by Vadim caused an interesting discussion on Facebook. I am NOT going to continue it here, but decided to present some facts, specifically, list of public bug reports and feature requests for Group Replication (mostly "Verified", that is, accepted by Oracle engineers as valid) as of MySQL 5.7.17 (where the feature is promoted as GA), with just few comments to some of the bugs.

The goal is to double check this post when next Oracle MySQL 5.7.x release appears, to find out how much Oracle carews to fix the problems already identified by MySQL Community.

So, here are the bugs and feature requests in MySQL Server: Group Replication category (I've included only those reported for 5.7.17 into this post), as of today:
Now, make your own conclusions about the maturity of Group Replication in MySQL 5.7.17. I manage to avoid it so far, as I try to keep myself as far from any kinds of "clusters" as possible... Had not worked well with Galera, unfortunately - I have to read its verbose logs on a daily basis.
Posted by Valerii Kravchuk at 3:34 PM 1 comment:

My previous post on MyRocks was intended to provide some background details for a couple of slides for my FOSDEM talk on profiling MySQL. The results and performance demonstrated by MyRocks vs InnoDB from MySQL 5.7.17 were not really important to show how perf helps to understand where the time was spent while executing of one specific query vs the other (with the same results, but different plan), but they still caused a lot of comments from people who care, so I decided to double check and clarify few more details.

First of all, it was noted that one may get the same execution plan for both queries (even in INNER JOIN case we may end up with filesort and access only via PRIMARY keys), like this:

Indeed, I've ended up with this plan easily, sometimes, after executing ANALYZE for the tables involved. But this was not always the case (here we see for InnoDB) and next ANALYZE or OPTIMIZE may change the plan:

Surely I can always force the plan needed, this way or that:

I was interested more in comparing scalability and performance of these different ways to execute the same query, just because usually it's considered good to have covering secondary index used instead of creating temporary table and filesort for this kind of queries... The reality shows this is not always the case.

I've got suggestion to maybe tune something for MyRocks case or use jemalloc library. I am open to any tuning suggestions from real experts based on the fact that these are default settings in my build:

and hardware details of my QuadCore box with HDD were shared previously. I tend to think no tuning is needed for such a small tables and corner read-only use case (if maybe READ COMMITTED isolation level, that I plan to study separately, as initial attempts had not shown much difference).

Just for completeness, this is the minimal configuration file I've used and the commit I've built from (after creating a new clone yesterday, this time the default branch was fb-mysql-5.6.35):

You can guess that I tried to add some more options along the lines of the fine manual, but they had not changes things much to better, so I've commented them out.

So, with this fresh build based on MySQL 5.6.35 I've decided to study the influence of jemalloc for both queries with 4, 8 and 16 threads (most interesting settings for the QuadCore). I've used the --malloc-lib option for mysqld_safe to force use of jemalloc, and checked pmap ouput for mysqld process for jemalloc entries to confirm that it was really preloaded:

So, here are the raw results of mysqlslap runs with jemalloc preloaded after I made sure queries use different plans (STRAIGHT_JOIN uses PRIMARY keys and filesort, while INNER JOIN uses covering secondary index and avoids filesort):

Now, the same but with default memory allocator picked up (no jemalloc):

Finally, this is how it looks like on a chart: 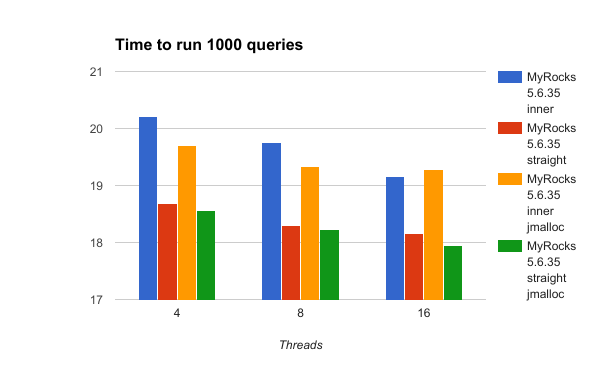 I can make the following conclusions:
I am sure I am doing something wrong with MyRocks, just tell me what exactly...
Posted by Valerii Kravchuk at 8:01 PM 7 comments: